So you walk into your backyard one day and find a small, medium, or large sinkhole. You step along the edges and more soil falls down into the hole, making the size of the hole larger. You look into the hole and cannot find any immediate cause.

Maybe you have children who play in the yard. In fact, maybe the sinkhole coincidentally occurred right underneath the swings of their play set. As a responsible homeowner and in some cases, a parent, you want to get to the bottom of this (literally and figuratively) to find out what caused the sinkhole and if any other areas of your yard are at risk of imminent soil collapse. Should you hire someone to perform a ground penetrating radar survey of your property? This blog entry will discuss the answer to your question and some solutions but first a few pointers on sinkholes.

In essence, a sinkhole is an area of ground depression caused by a collapse of the top soil layer. Sinkholes can be as small as 3-feet and as large as 2000-feet in diameter and depth but most homeowners will encounter the smaller variety. Nevertheless, even a small sinkhole is unsettling to see and potentially dangerous. Sinkholes can form gradually over time, starting a depression of soil but not an actual collapse. Sinkholes can also form suddenly. If left untouched, sinkholes will typically get larger over time in diameter and depth.

Sinkholes can be formed by natural or artificial processes. In the natural process, there is a wearing away under the ground of supporting soil or underground bedrock, such as from an underground water source (e.g., a spring, accumulation of ground water). When enough of the supporting soil wears away it does not provide enough support for the ground above and the ground collapses. In the artificial process, the water accumulation under the ground is caused by water main breaks or sewer collapses, but this typically happens in urban streets.

For backyards, a common man-made source of sinkholes is buried debris such as trees or appliances (e.g., refrigerators). If this sounds like an exaggeration, it’s not. Just take a look at this full free excavated from a backyard sinkhole that was buried 23 years prior by a developer or contractor: 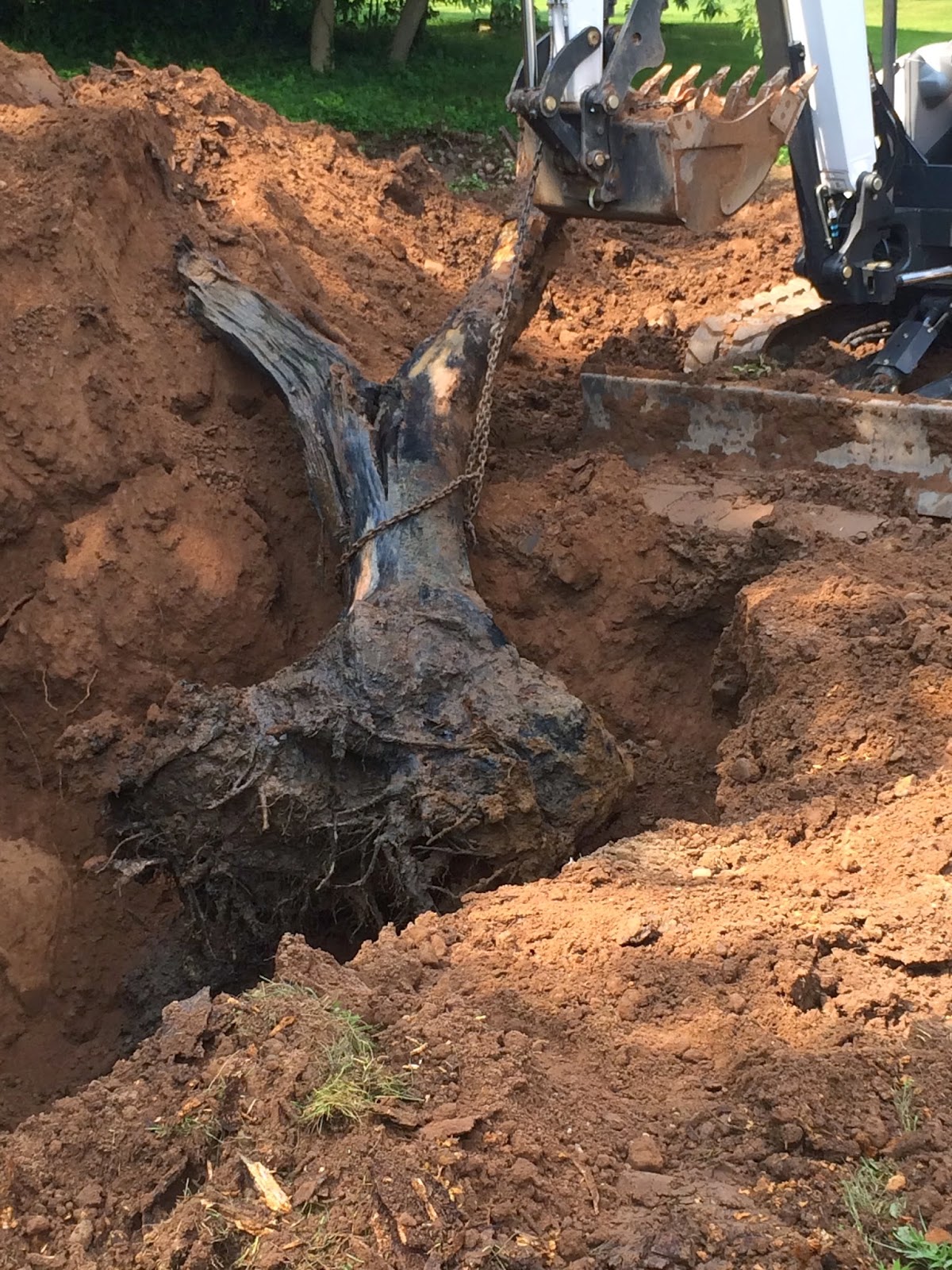 Construction contractors and building developers have a long history of excavating yards (e.g., removal of tress) during the building process, digging 10 to 20 foot pits, and burying the items under the ground. This is done to save the contractor or developer the expense of discarding the trees themselves and they often get away with it because by the time it takes the sinkhole to form (e.g., up to 20 years) it is very difficult for the homeowner to track back who was originally responsible. Also, in many states there was no law in place at the time to ban the burying of debris under the ground. In debris-caused sinkholes, the sinkholes form because the debris erodes over time which causes air pockets in the soil, like this: Air pockets are also caused when multiple items are thrown on top of one another in the ground, often in a criss-cross manner such that the soil does not pack tightly when the hole is filled in. Over time, these air pockets enlarge, further destabilizing the ground, and the soil eventually collapses.

What many people do when they find a sinkhole in their yard is to purchase dirt and fill the hole in with it. This can cost a few hundred dollars depending on how much dirt is needed and can be pretty labor intensive, especially if you have the dirt dropped off on your driveway and you have to transport it to your yard load by load with a wheelbarrow. Besides the downsides of cost and labor, it is not a good solution to pour dirt over a sinkhole because you are not solving the underlying problem. The ground may look filled in after you pour the dirt on it, but because the underlying problem is still there, the sinkhole will eventually form again.

To fix a sinkhole in the yard, the best solution is to hire a reputable person who operates an excavator to dig out the hole until the source is discovered. This should be done in consultation with the town engineer. If the cause is debris, then the debris needs to be removed by the excavator. You want to be sure that the excavator can go at least 10 feet under the ground. Use of an excavator includes digging some test holes next to the sinkhole to make sure there is no additional debris buried there. If the source is underground water, the town engineer should be consulted for possible solutions. A local geologist should be consulted as well.

One suggestion that a geologist might make is to obtain a ground penetrating radar (GPR) survey to determine if the source of the sinkhole could be identified and if there are any other areas of soil at risk of imminent collapse. Ground penetrating radar is a technique in which a large machine that looks like a lawnmower is pushed over the ground which sends radar pulses deep into the ground to detect disruptions in the soil such as large objects or air pocket voids.

If you think that you can do this with a metal detector, think again. A metal detector can only detect metal (e.g., it won’t detect trees or soil voids) and can only penetrate about 1 to 2 feet below the soil (see our entry on how DD metal detecting coils work). By contrast, GPR can detect soil abnormalities about 7 to 10-feet down below the ground. Forget buying one yourself though because the machine costs over $10,000 and requires specialized training to interpret. Renting one would also be expensive. For this reason, you would need to contact a local geologist to find someone in your community who operates a GPR system. This will typically be a large corporation that generally specializes on commercial projects. As such, it may take some convincing to get the company to come to a residence to survey your property but it can be done.

But would GPR of your house actually be worth it? In my opinion, based on personal experience, probably not. The first reason is that if you are really intent on finding the source of the sinkhole, then that is readily accomplished by hiring an excavator who can dig to find the source of the sinkhole. GPR is not needed to do this. For moderately sized properties (less than an acre), a GPR survey of the yard is probably going to cost at least $1000. Hiring an excavator is expensive enough so there is no need to pay for the GPR survey when excavation alone is sufficient.

Where GPR can potentially help you is locating other spots of soil distortion that may not be close to the existing sinkhole. So for complete peace of mind, this is the only reason I can think of that the cost of a GPR survey might be worth it. For example, you may get a report that looks something like this: 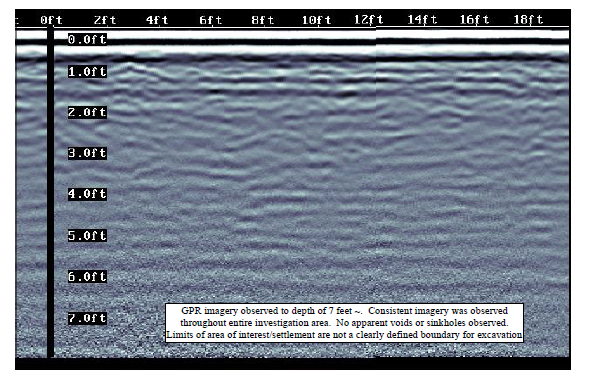 However, it is important to keep in mind that GPR may not be able to penetrate as deep as the source of the sinkhole is, providing a false sense of security. Also, GPR is performance is limited in highly conductive soils (e.g., clay and salt-contaminated soil) and soils that contain a mixture of conditions (e.g., soil intermixed with rocks).

Regardless of whether you chose to use GPR or not, remember that the most important aspect of sinkhole remediation is to eliminate the source of the problem, not to put a Band-Aid over it. Lastly, after you removed and/or fix the cause of the sinkhole and fill in the hole with new soil, resist the urge to immediate re-seed the area. This is because you will likely have settling of the soil over the winter. Wait until the spring to top it off with some additional soil and the reseed the area.
Posted by MedFriendly at 9:49 PM